The Cloud Stinger has been a consideration for serious gamers on a budget for some time now, and for good reason — the headphones come at only $50. But are they worth it, or should you keep saving up? We put them to the test to find out.

The headset is decidedly less unique than the Cloud Revolver and Cloud Revolver S, but that doesn’t mean they don’t look good. In fact, they look great — despite being a little plain. The HyperX Cloud Stinger features a sleek, black look with red highlights thanks to the HyperX logo on each earcup. The headphones are slightly bulky — but not overly so, and the fact is that this is a gaming headset that’s probably going to stay at home anyway. 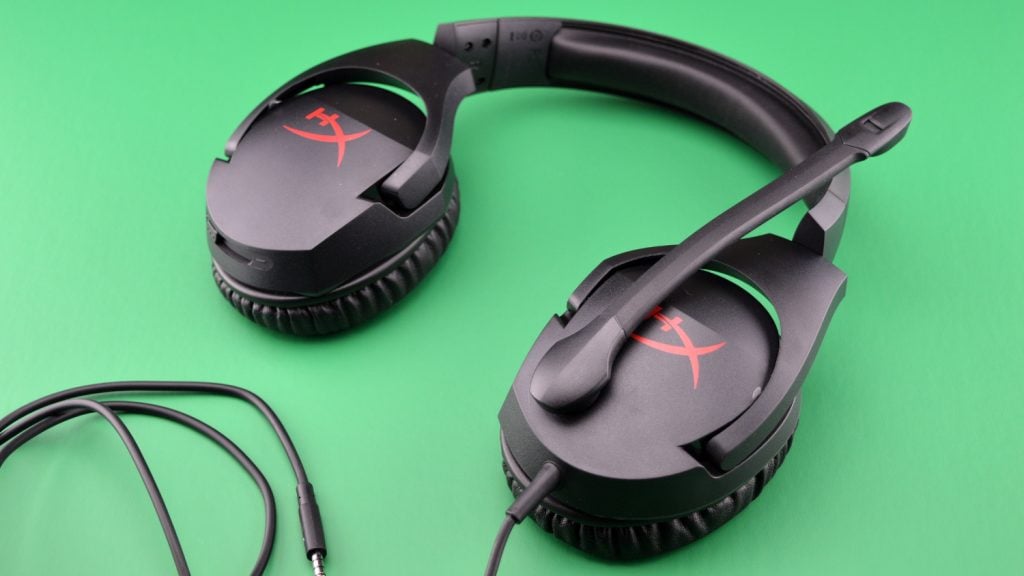 The headset is built almost uniquely out of plastic, and while it’s generally strong plastic that looks great and shouldn’t break easily, we would have liked a little more metal, which would help in the build qualtiy. We imagine this is one of the ways HyperX was able to cut costs enough to charge only $50 for the headset.

A nice touch to this headset is that both earcups can swivel back a full 90 degrees — which is great for both storage and ensuring a good fit. It’s actually something the headphones offer that none of HyperX’s more expensive models have. In the box, you won’t find much — but then again you don’t need much. All you’ll find are the headphones themselves, and a breakout cable which separates the headphones from the microphone. That’s really all you need here — so we’re certainly not complaining.

While the HyperX Cloud Stinger headset may be a little plain, it still looks great and offers a good amount of functionality. Some of the plastic could certainly have been replaced with metal — which would help up the build quality, but it’s not a deal-breaker by any means, and especially not at this price point.

When it comes to comfort, the HyperX Cloud Stinger generally shoots way above its pay-grade. That’s to say, for a pair of $50 headphones, they feel great. That’s an important thing to consider. The fact is, gaming headsets need to be comfortable, because gamers generally have them on for at least a few hours at a time. There’s plenty of padding to go around on both the earcups and the headband — which is great news. Even after a few hours of use, we never found ourselves feeling like we needed to take the headphones off. Like some other HyperX headphones, they did get slightly warm after hours of use — but not overly so, and not enough to avoid this headset by any means.

In general, the HyperX Cloud Stinger is extremely comfortable, and you’ll be able to wear it for hours on end with no problem.

So the HyperX Cloud Stinger gaming headset is comfortable and looks pretty good, but how does it sound? It may not be as powerful as its more expensive headsets, but it still sounds awesome.

Let’s start with the bass, and while it’s generally well-tuned, there could be a lot more of it. The bass that is there sounds great and helps make those explosions nice and powerful — but it could definitely use some more bass response to help make it sound a bit more full and deep. The mid-range is extremely well-tuned. There’s a noticeable bump in frequency response here, and that helps whatever you’re listening to sound very clean. That bump isn’t just helpful for gameplay or listening to music — it also helps accentuate the voices of your teammates so you can better hear what they’re saying.

The high-end is also pretty well-tuned, but like the bass it could be a little more accentuated. The result of a slightly lacking high-end is that things like gunshots don’t sound as crisp as they could during gameplay, and instruments like cymbals lose some of their sheen during music-listening.

In general, however, the HyperX Cloud Stinger sounds great for a headset this cheap. Sure, it’s not without its issues — but at this price point those issues are are seriously minimized.

The built-in microphone is a nice touch for a headset at this price, but don’t expect a top quality sound. It’ll get the job done for sure — your teammates will be able to hear what you’re saying, but in general it needs some work. Your voice will sound a little nasally, and some background noise will filter through. As mentioned, however, the fact is that this is a $50 headset — and a microphone at all is a nice addition at that price point.

We’ve said a few times that the HyperX Cloud Stinger headset is good for its price, and that’s the truth of the matter. It won’t stand compared to more expensive headsets like the HyperX Cloud Revolver or the Sennheiser Game One headset. At $50, however, it can’t be beat.

That’s right — if you’re looking for a gaming headset at $50 or under, then look no further. The Cloud Stinger offers all the basics: a decent look, a high comfort level, and a good sound — all at a very, very reasonable price. In fact, we loved it so much that it has earned a Headphone Review Bronze Medal. You can buy the HyperX Cloud Stinger for yourself below.