Cheap headphones that sound great can be really hard to come by. Sound Intone has proven that once before with the CX-05‘s which looked pretty nice but compromised on sound quality. Now, the company’s back with the Sound Intone P6’s, a pair of Bluetooth headphones that come with a (very) small $36 price tag.

Can the P6’s prove that Sound Intone has something high quality to bring to the table? We put the headphones to the test to find out.

The first thing you’ll notice about these cans is their design, and it’s somewhat of an interesting one. The headphones are largely built with a cheap-looking plastic. On top of that, they’re not very slim — the earcups stick out much further than anyone might want them to. The left earcup is quite clearly where all the magic happens. On the side of the earcup you’ll find a series of four buttons, including power, volume controls, and playback controls. That’s probably not the best layout — when you can’t see what the buttons can do, controlling volume and playback can get a little confusing. It would have been nice to see some of those buttons moved over to the right earcup.

Also on the left earcup, you’ll find both the charging port, which is microUSB, and the aux jack, which lets you plug the headphones in for wired playback in the event that you’re running low on battery. There’s one more feature on the earcup we haven’t mentioned yet — a TF card slot, also known as a microSD card slot. Jury’s out on why they didn’t label it as a microSD card slot, but it is a cool feature, especially for those who might want to take the headphones on the go without the need for a phone or music playback device.

You can cycle through the different modes on the headphones by hitting the “M” button. If you do that, you’ll find a third mode beyond Bluetooth and SD Card — FM radio. It’s a neat feature, and while radio is certainly a dying medium, it’s a nice option to have. What you get in the box is somewhat surprisingly little. While the headphones can fold up to an extent, there’s no carry bag or hard case to actually carry them around in. That’s a bit frustrating. If you want customers to carry your headphones around, there’s no reason not to include at least a carry bag. Instead, you’ll simply find an aux cable and a USB – microUSB charging cable. The aux cable is actually pretty nice — instead of a plastic sleeve it features a braided nylon sleeve, which looks nicer and is stronger.

Depending on the model you get, the headphones will either be made from a black or white plastic with colored highlights. We had the black model with blue highlights.

So they don’t have an amazing design, can they claw back a few points with comfort? Unfortunately, no. First thing’s first, these headphones need to be able to extend a little more than they currently can. We had our pair extended as far as it could go, and we don’t have overly large heads. On top of that, there really isn’t much padding. The earpads are a little under-padded, but combined with the fact that the Sound Intone P6’s have a relatively firm clamp, they’re not comfortable enough to wear for much longer than 30 minutes or so. Some won’t be bothered too much by that, but considering these are on-ear headphones, special attention does need to be paid to padding, and it just wasn’t for these headphones. Then there’s the head band padding. There’s almost none there, plus it’s hidden under a hard swath of leather that can pull on your hair when you move the headphones.

The sound of these headphones actually isn’t all that bad for $30. Don’t take that to mean that they sound good — they don’t. But for the price, it’s passable.

Let’s start with the bass. There isn’t a ton of it, but it’s certainly there. Kick drums and basses can bea heard pretty easily, and while there is a little muddiness, we can let that slide at this price.

The high-end is, unfortunately, barely there. It seems like there’s a low-pass filter at a frustratingly low frequency, meaning that most of the high frequencies have been cut out altogether or are seriously dipped. Vocals don’t have much presence, cymbals don’t really shine through, and so on.

The Sound Intone P6’s do cut out some ambient noise, however they don’t do much — you’ll still hear traffic noise and such, which can be a good thing for safety’s sake. 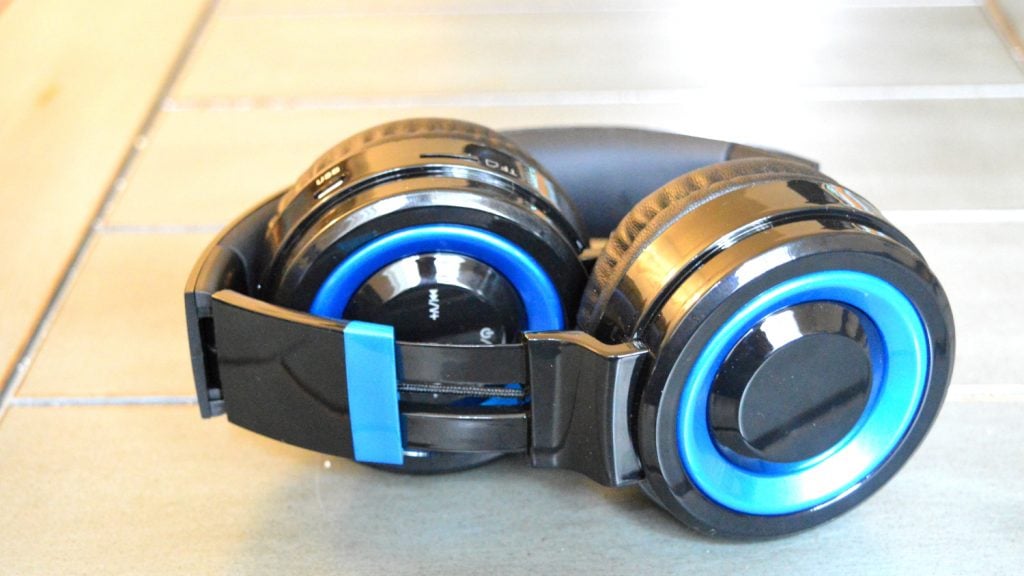 There are also a few weird bugs when it comes to the sound of these Sound Intone P6’s. For example, it seems like there’s a gate at quite a high volume, something that can cut out the music when it’s quiet. That’s unfortunate, because not only does it disrupt sound, but it also pushes the idea that music should be as loud as possible at all times — destroying dynamics in music.

The sound on the Sound Intone P6’s isn’t terrible, but it’s not great. At the price, it’s certainly passable, but if you can afford more expensive headphones we recommend it.

For headphones that extend so far out from your head, you would expect a somewhat large battery. The Sound Intone P6’s offer nothing of the sort. With only 6 hours of battery life, the P6’s come well under what other Bluetooth headphones have to offer, although perhaps not at the same price point.We experienced slightly less than the advertised 6 hours, but results will vary depending on your use.

As far as Bluetooth performance goes, the Sound Intone P6’s don’t offer much more or less than any other pair of cans. Your range will depend on things like obstacles, but without any obstacles you should hit around 25-30 feet or so.

At face value, these headphones aren’t that great, but that ignores one key aspect of them: their price. At only $30-$35, they’re actually not a bad pair of cans. No, they’re not the most beautiful, nor the most comfortable, nor do they offer a very good battery life — but if you’re looking for a pair of headphones to wear around the house and don’t have too much to spend they may be an decent choice.

We would have liked to see at least a soft bag come with these headphones, and a little extra work should really have been put into their sound quality, but again, at this price there isn’t much room to complain.