I’m not a huge fan of in-ears, but they most certainly have their place — there’s something about that portability that you just can’t beat in certain situations. Like, for example, if you want to listen to music while you run or workout. That’s what the MEE Audio X7 Plus earbuds are designed for, and we put them to the test to find out if they were worth the $99 price tag.

The MEE Audio X7 Plus in-ears are actually pretty sleek. When you think of “sports earbuds,” “sleek” probably isn’t the first word that comes to mind, especially when those earbuds have a wire that wraps around your neck, but the X7 Plus’ fit the bill.

The in-ears have a central control unit, which presents playback buttons and a microphone, out of which two wires extend from either side, leading to each earbud. That central unit is also home to a small rubber door that opens up to reveal a microUSB port — that’s where you’ll charge the headphones.

Let’s be clear — you’re not going to put these in-ears on and forget that they’re there. Apart from the wire that wraps around your neck, the actual in-ears are quite big. That’s not necessarily that much of a bad thing — they’re not overly large, and they’ll fit most people pretty well. But, they’re not small enough to feel natural either. Setting up the earbuds is pretty easy. Simply hold the power button and then continue holding it until you hear the word “pairing.” Pair the headphones on your phone or other playback device, and once it’s finished pairing you’ll be told that the connection was successful.

The in-ears also come with a carrying case, which offers decent protection for those throwing these headphones in with the rest of their post-work workout gear. It’s a nice addition, and keeps things relatively organized, however you probably won’t want to use the case as a base to a stack of books or anything.

As mentioned, the earbuds are relatively large, but that’s not to say that they’re uncomfortable — an important aspect to keep in mind. That’s aided by the fact that they come with three sets of tips, which is perfect for those with anything other than “normal” sized ears.

The size actually gets useful at some point, helping the headphones stay in your ear. The in-ear section sites inside of your ear canal, while the rest of the headphone sits in your outer ear — that helps the headphones stay in. While they are relatively good at staying inside your ear, we did have one of the fall out at different points during a run. That’s to say, you might have to get used to popping them back in every now and them, despite the fact that normally they should be fine. Perhaps the most frustrating part of the earbuds is that the wire doesn’t actually fit snugly around your ear — instead, because of the way the wire is shaped, it freely sits above your ear. That’s frustrating because at times the wire kept hitting the top of my ear each time I took a step during a run — which got a little annoying.

In general these earbuds stay in well and are relatively comfortable, however after prolonged periods of wearing them, you will notice their presence. They might not be the best choice for those training for marathons or those who spend all day everyday at the gym, but for hour-per-day gym types and those who enjoy a run in the morning before work, these will do just fine.

The frequency response on these puppies is actually pretty good — you get a lot more bass out of their 6mm drivers than you might expect. In the end, it wasn’t the bass we were worried about — it was the high-end.

While there’s plenty of bass to go around, we really missed a decent high end — the MEE Audio X7 Plus’ really lack the high end that could make them sound a lot more exciting. MEE Audio could add a ton more high end than we have here, and there would be no danger of there being too much. It sounds almost as if there’s a low pass filter applied to the sound, where all the frequencies below around 17kHz were cut off, and even then the higher frequencies that could be heard were dipped a little. Sure, you may not care that much about the best possible audio quality when you’re running along, but that doesn’t mean you shouldn’t get it anyway. 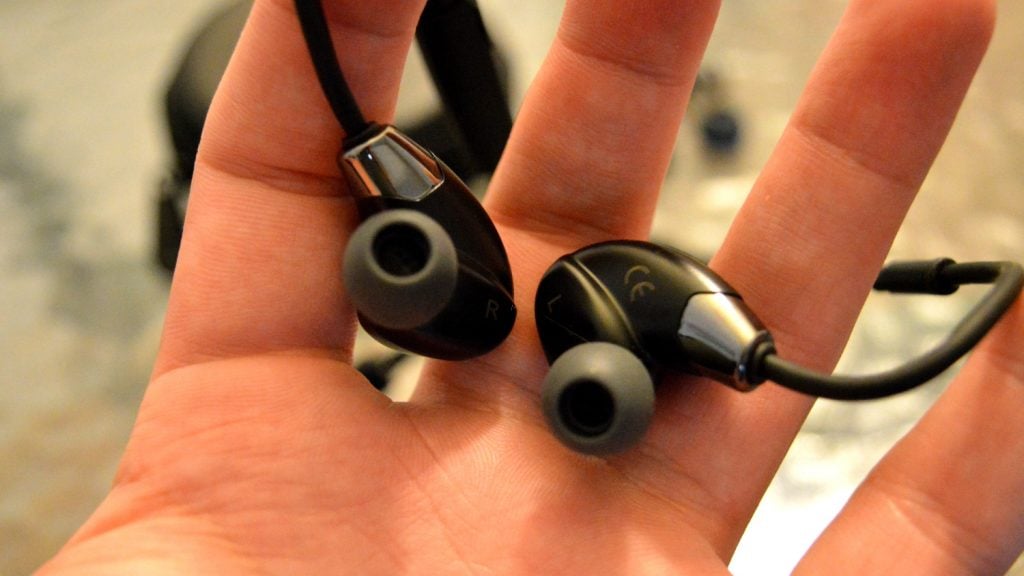 Thankfully, the headphones somewhat redeem themselves in the sound department with relatively decent noise isolation. As in-ears do, the headphones provide a seal into your inner ear. They almost block too much noise out — make sure to keep an eye on your surroundings if you go running with these headphones.

According to MEE Audio, the X7 Plus headphones offer around 7.5 hour of playback time, which is pretty much in-line with what we experienced. That’s not an incredible amount of time, but it will get you through your workouts, if that’s what you’re buying these for. You’ll probably need to charge them every few days to make sure they offer enough juice for your workout sessions, but that’s not that big of a deal if you remember to do so.

Perhaps more importantly is the Bluetooth range the headphones offer. MEE Audio rates them at up to 30 feet. We weren’t able to get quite that much range out of them, and certainly not a clear signal at that distance, but there are so many factors that go into consideration — like obstacles. If you keep your phone or listening device on your person while working out, you’ll be fine. You should even be fine if your listening device is in the same room. We generally managed to keep a clear signal at up to around 20-25 feet, after which things got a little stuttery. They still kept a connection, to be sure, just not a perfect one.

The microphone in these earbuds also works fine — about as well as you would expect. They’ll offer enough quality to talk on the phone when you need to and that’s about it.

As far as sports earbuds go, the MEE Audio X7 in-ears aren’t a bad option at all. They’re generally comfortable, especially for short periods of time, and while the sound quality leaves a little to be desired, if you’re fine with that, for $99, they come at a decent price — normally, headphones of these quality range between $100 and $150.