Headphone have largely remained the same over the years. Simply plug em in and start listening — and what you buy is really what you get. There have been a few companies of late, however, that aim to truly change how headphones work and help make the listening experience a lot more comfortable. Axel Audio did this with the Soundscape FX cans, which got mixed results. Now, there’s a company doing the same with in-ears. Introducing the Echobox Finder X1 customizable earbuds.

Customization, however, can’t be the headphones’ only selling point — they still need to look decent, stay comfortable, and sound good. But do they? We put them to the test to find out.

Echobox has designed a pair of very premium earbuds, and the premium experience starts from the unboxing process.When you open the box for the first time, you’ll be presented with a clean, simple, and beautiful look at the earbuds, which rest cozily in the top section of the box — the rest of the package is found underneath a cover, helping keep that clean look. Under the hood, so to speak, you’ll find a hard case, a whopping five pairs of standard gel eartips on top of the normal sized eartips already fitted to the Echobox Finder X1’s, and a pair of Comply memory foam tips too. That’s a pretty nice addition — there’s really no excuse for companies not to include Comply tips these days, especially at this price point. All of these eartips sit nicely in a mould, which itself sits nicely in the hard case. Not only that, but there’s something else you’ll find in the mould — extra “filters,” which can be screwed onto the earbuds themselves and offer a slightly different frequency response. We’ll talk more about how that sounds later, but we can mention now that they’re a bit of a pain to get out of the mould. We get that they need to be fastened in to avoid losing them, but you’ll want to be careful not to scratch them with tweezers to get them out too. The best way we found was to bend the mould a little until the filters kind of fell out.

The earbuds themselves look great too. They have an interestingly unique bell shape, but that shape is very classy, especially in the titanium casing.

Along the cable, you’ll also find some in-line controls with a built-in microphone. Another nice addition, especially for those looking to pop their phone in their pocket on the way to work.

Not everything’s perfect though. It took us a few seconds to figure out which earbud is for which ear — the left and right markings are somewhat hidden near the cable, and it’s gently etched into the titanium — so you can really only see the markings in certain light. We would also have liked to see a slightly more premium cabling. We love the braided cable on earbuds like the Meze 11 Neo’s, and while the cable on the Finder X1’s isn’t under-par, it’s also not above-par like the rest of the design seems to be.

Being in-ears, the Echobox Finder X1’s aren’t supremely comfortable, but as far as in-ears go they’re pretty damn good. We tested a few of the eartips with these headphones, and can safely say that they all feel pretty good. We strongly recommend, however, using the Comply tips. That’s because the other tips seem to be a little prone to falling out, plus the Comply tips are much better at creating a seal in your ear. 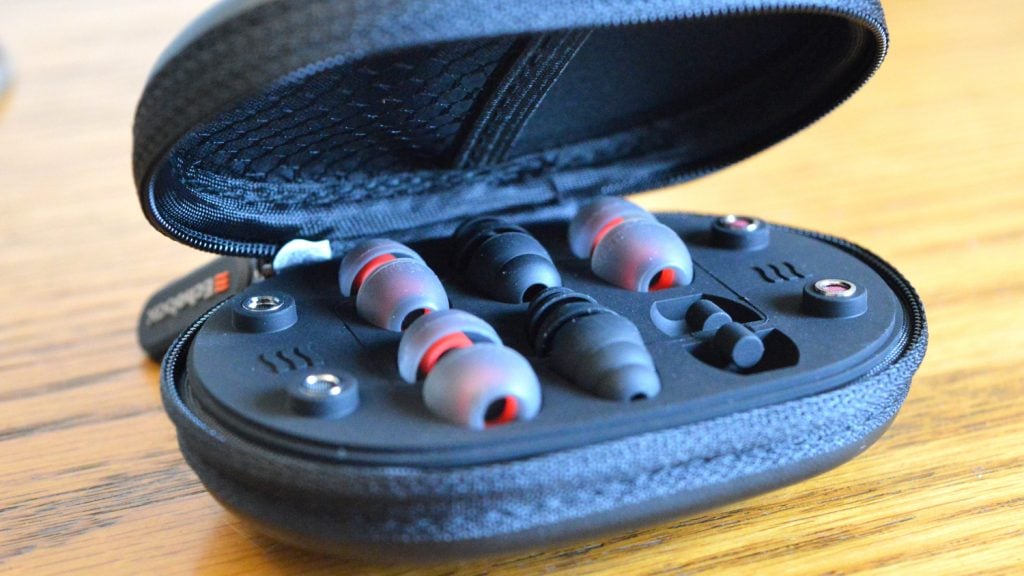 The only downside to the Comply tips is that they’re a bit of a pain to take off, and you have to be careful to not rip them. We recommend finding the right filter for your preference before putting the Comply tips on — that way you won’t need to take them off regularly, which will help extend their life span.

As mentioned, any earbud or in-ear-style headphones are going to be a little uncomfortable after long periods of listening, but the size and shape of the Echobox Finder X1’s helps minimize any discomfort you would otherwise experience.

Of course, look and comfort are only part of the equation. If you’re spending over $200 on a pair of earbuds, you also want them to sound good. Do the Echobox Finder X1’s? Turns out sound pretty good.

Let’s start with the silver filter, which is what Echobox claims are the most balanced — something that we found to be true in our testing. They offer plenty of bass without going overboard, something that’s paired with a nice high-end that helps bring out the vocals and cymbals. There does seem to be somewhat of a slight high-mid bump in the silver filters, which can cause music to sound a little bit like an old-school radio at times, and which can be a little piercing in some songs. For example, in Dr. Dre’s Forgot About Dre the snare drum was a little too much for these filters to handle. Of course, the red filters go nowhere in alleviating that — they’re the brightest filter of the three. They still sound pretty nice, to be sure, but the bass is significantly lowered on them, so if you’re into rap or hip-hop, then maybe the red filter isn’t the right choice for you. They did, however, sound pretty nice on rock music, like AC/DC’s Back In Black — they really brought out the vocals and the grit in those guitars.

Apart from the filters, there’s not much to report. Even at really loud volumes we didn’t notice any distortion, which is a good thing. If you do hear distortion on these, we suggest that you’re probably listening to your music too loud.

Even if these earbuds weren’t customizable and the standard acoustic filters were the only acoustic filters, these are an excellent pair of earbuds. Echobox has clearly put a ton of attention to detail with the Finder X1’s — from the beautiful design, to the hard case, to the mould of eartips that fits inside that hard case, they’re a beautiful pair of headphones. On top of that, they sound pretty great too.

You can buy the Echobox Finder X1 in-ears for yourself below.