The JBl Everest Elite 700 wireless headphones are available in two colors — black and white — and while the design is certainly simple, it’s not boringly so. The headphones feature somewhat large ear pads, and are somewhat bulky, however overall they deliver a relatively sleek look.

On the left earcup you’ll find a three-button control pad — a volume up and volume down button, and a central button that controls things like playback, and your phone call, depending on how many times you press it. On the right earcup, you’ll find the power button and a fancy shmancy programmable ‘smart button,’ which we’ll talk a little more about later. On the bottom of the left earcup you’ll find an aux jack for a wired connection, along with a microUSB port for charging. While standard, it’s nice that there’s an option for a wired connection — the battery will last a while, but not forever, and it’s no fun being caught out without your headphones.

As mentioned, the headphones are bulky — they look huge on any head, even the larger ones. Sure, once you put them on that doesn’t matter as much, but if you’re going for a fashionable pair of headphones you can take out and about, you may want to look elsewhere.

For those that don’t care about the bulk, however, the headphones look pretty nice. They’re modern, smooth, and feature a quality build. In the box you’ll also find carrying bag. It’s not a hard case — so you’ll want to be careful with the headphones if you intend to put them in a backpack or something similar, but it will keep them clean and together.

The huge earcups aren’t just there to add bulk — they add comfort too. The Everest Elite 700’s may not feel like you’re strapping clouds to your ears, but they are certainly comfortable, which is an important aspect to consider. There’s plenty of foam inside the earcups to bring the comfort level up, and it’s easy to wear the headphones for long periods of time without too many issues. The foam on the headband is slightly less comfortable than the foam in the earcups, but not frustratingly so. Perhaps the only real issue with the headphones in the comfort department is that they’re slightly tight on the head — as in they fit a little too snuggly. If they were slightly less tight they would be far more comfortable, but even with the tight fit they’re still pretty darn nice to wear. Of course, that tight fit helps get rid of any spaces between your head and the headphones, so the trade off is more sound isolation.

The JBL Everest Elite 700’s have the smarts

The coolest thing about these headphones has to be the accompanying app, which is available for iOS and Android. The app gives you control over multiple aspects of the listening experience. For example, you can control how much active noise cancellation the headphones deliver in each ear — that’s right, you could set the the left ear to let in as much outside noise as possible while the right ear uses full noise cancellation. In general, you’ll obviously want the two ears to cancel the same amount of sound, but it’s still a cool feature. 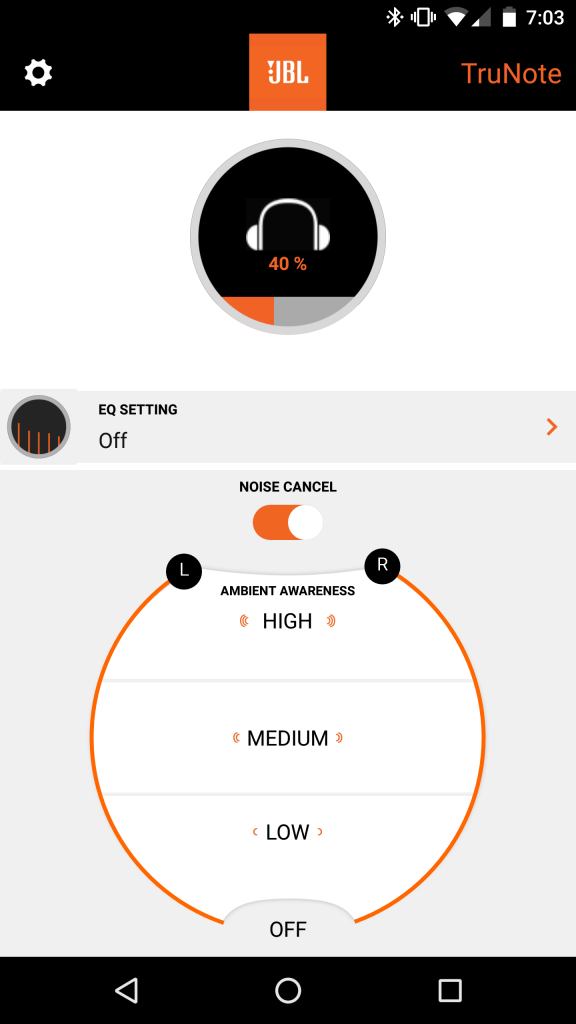 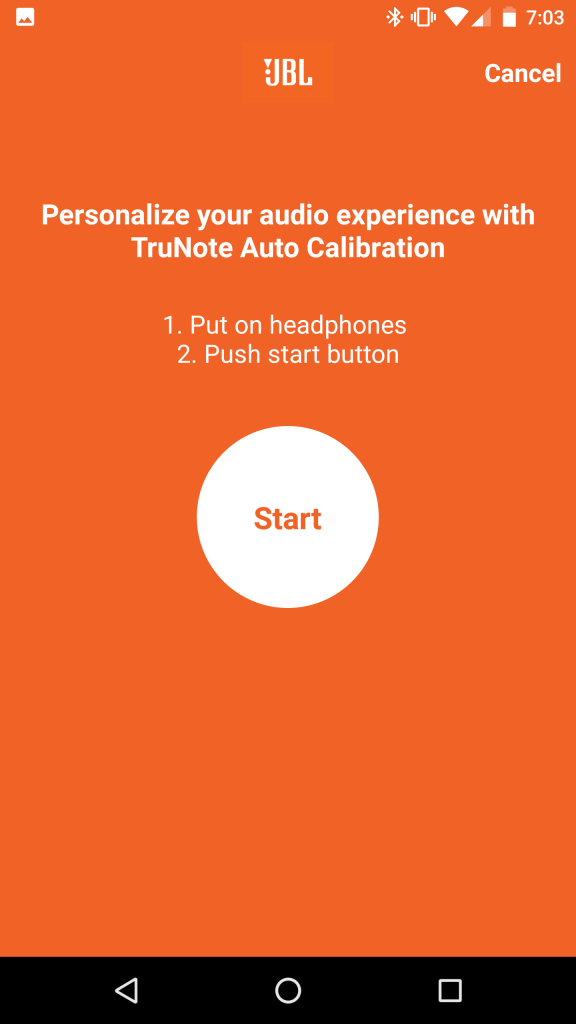 In the app, you’ll also be able to control the EQ of the music being played, which is a very cool feature. It makes the sound almost infinitely customizable, which is helpful for those that listen to a lot of different kinds of music or who don’t like how the headphones sound out of the box. Unfortunately, the EQ doesn’t do as much as it could. Turning a frequency down all the way doesn’t affect the sound as much as some might like.

You don’t actually even have to calibrate the EQ yourself if you don’t want to — JBL’s TruNote custom EQ apparently uses two internal microphones to detect the contour of your actual ears to come up with a custom filter that delivers the optimum listening experience according to your ears. The process only takes a few minutes, and the result is pretty nice. Cool, huh?

Last but not least is that you can control what the programmable button on the right earcup controls. You really only have two choices — ambient aware or active noise cancellation, but it’s still nice to be able to have some out-of-app control over those features.

Speaking of ambient aware, that’s another cool feature of the app — and ultimately the headphones. Within the app you get to control how much ambient awareness there is, but it’s the headphones that do all the work. Ambient awareness is perfect for those that walk around the street with their headphones a lot, and it basically uses microphones to bring in outside sound and play it back to you in real-time. That’s a perfect way to stay aware of the traffic and your surroundings while still getting a nice, isolated sound.

The only drawback to the app is that it’s only available on iOS and Android. It would be nice to have a Mac and Windows version of the app, however the nice thing is that you can set an EQ profile, and that profile will carry over even if you connect to a different device.

Apart from that, the app is easy to use and well designed — which is nice, considering not many manufacturer-built apps are.

Considering how customizable the headphones are it would be a little unfair to judge the headphones, but we can talk a little about the out-of-the-box listening experience.

Without the EQ, there’s plenty of bass, but it would be nice to have a few extra high frequencies in there. The sound  is overall a little muddy and a little unexciting — however that 10-band EQ can obviously remedy this. If you don’t know how to use an EQ, we recommend taking a few minutes to learn if you’re interested in these headphones — if you take those few minutes, you’ll thank us later.

It’s worth noting that ambient awareness pretty significantly alters how the music sounds when you switch it on. Music immediately has less midrange — which for many people isn’t a bad thing, but something to keep in mind. You might want to create two EQ profiles, especially if you mainly use the headphones with your smartphone — one for with ambient aware, and one for without.

According to JBL, the Everest Elite 700 headphones will last 15 hours with noise cancellation and 25 hours without — this will vary hugely depending on your listening habits, but JBLs estimate was more or less in line with what we experienced, which is a very solid effort.

Last but not least is Bluetooth — we experienced a few minor stutters perhaps once every few hours and immediately after we connected the headphones to our device, but apart from that the listening experience was pretty smooth. Go through too many walls, and you might have some trouble, but that’s just how Bluetooth works.

Over all, the JBL Everest Elite 700 Bluetooth headphones aren’t a bad pair of cans at all. Sure, they could be a little looser on the head, and they are a bit bulky, but they’re generally very comfortable, have a great sound, and the app brings a lot to the table.